St. Nicholas is under the spiritual and ecclesiastical leadership of His Eminence Archbishop Makarios of the Greek Orthodox Archdiocese of Australia, within the jurisdiction of the Ecumenical Patriarchate of Constantinople.

Situated in central Darwin, St. Nicholas serves the Greek and English-speaking community in Darwin and the Northern Territory.

Saint Nicholas of Myra (traditionally 15 March 270 – 6 December 342AD) was an early Christian bishop of the ancient Greek maritime city of Myra in Asia Minor during the time of the Roman Empire. Because of the many miracles attributed to his intercession, he is also known as Nicholas the Wonder-worker.

Saint Nicholas is the patron saint of sailors, merchants, archers, repentant thieves, children, brewers, pawnbrokers, and students in various cities and countries around Europe. His reputation evolved among the faithful, as was common for early Christian saints, and his legendary habit of secret gift-giving gave rise to the traditional model of Santa Claus (“Saint Nick”) through Sinterklaas.

Among the Greeks he is a favourite of sailors, fishermen, ships and sailing. As such he has become over time the patron saint of several cities maintaining harbours. In centuries of Greek folklore, Nicholas was seen as “The Lord of the Sea”, often described by modern Greek scholars as a kind of Christianised version of Poseidon. In modern Greece, he is still easily among the most recognisable saints and 6 December finds many cities celebrating their patron saint. He is also the patron saint of all of Greece and particularly of the Hellenic Navy. 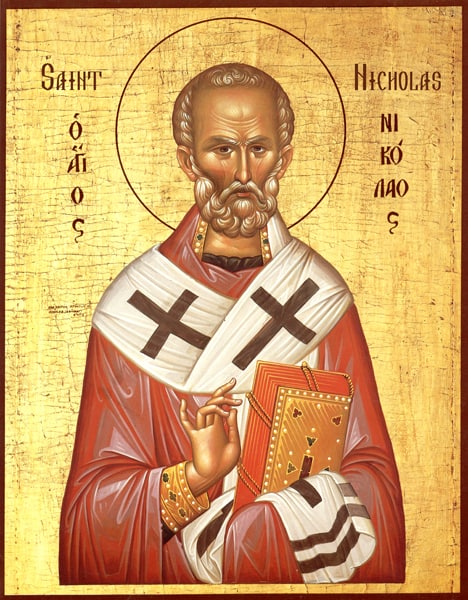